While looking for a recipe for homemade caramel sauce, I sort of stumbled on to some Samoa recipes. And then some more Samoa recipes. And then became a little obsessed with finding even more of them. WOW are there some AMAZING Samoa inspired recipes around the web. That little Girl Scout Cookie combines one of my all favorite flavor combos – chocolate, caramel and coconut. Every morning for breakfast I have a Kellog’s Fiber Plus Caramel, Coconut Fudge Bar,   My favorite treat at Dairy Queen is a caramel, coconut, chocolate chip Blizzard (not on the menu, but if you like that combo, have them make you one – ridiculously good). It’s just a magical combo. So given my love of the caramel, coconut & chocolate combo, I was almost giddy over the wonderful recipes and ideas that people have come up with.

Check out these delicious and creative Samoa inspired recipes from some very talented bakers and bloggers. I kinda want to make all of them, but the problem is I’m kinda certain I would eat all of them. All by myself. All at once.

Samoa Pretzels from Love From The Oven 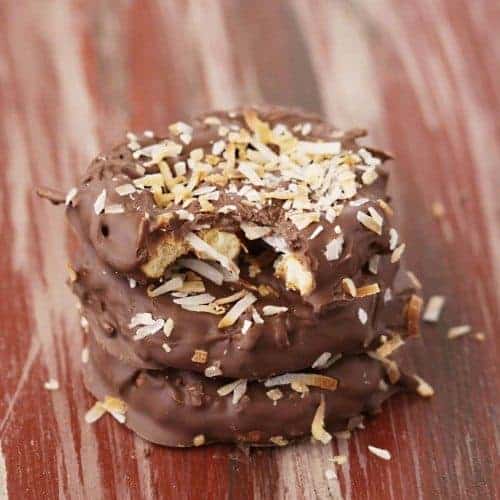 Samoa Bars by The Sweets Life

Samoa Cupcakes By Oh Just Put A Cupcake In It

Samoa Popsicles by My Baking Addiction

Homemade Samoas by In Katraina’s Kitchen

Samoa Truffles by Confessions Of A Cookbook Queen

Frozen Samoan By My Creative Stirrings

Samoa Marshmallows By The Domestic Rebel

Samoa Popcorn By Dip It In Chocolate

Samoa Cookie Granola By So I Married A Mennonite