Rich and buttery, with an amazing moist texture, this Jiffy Cornbread might just be the best cornbread you’ll ever have. I’m not sure I can adequately put into words just how utterly delicious this easy Jiffy cornbread recipe is! 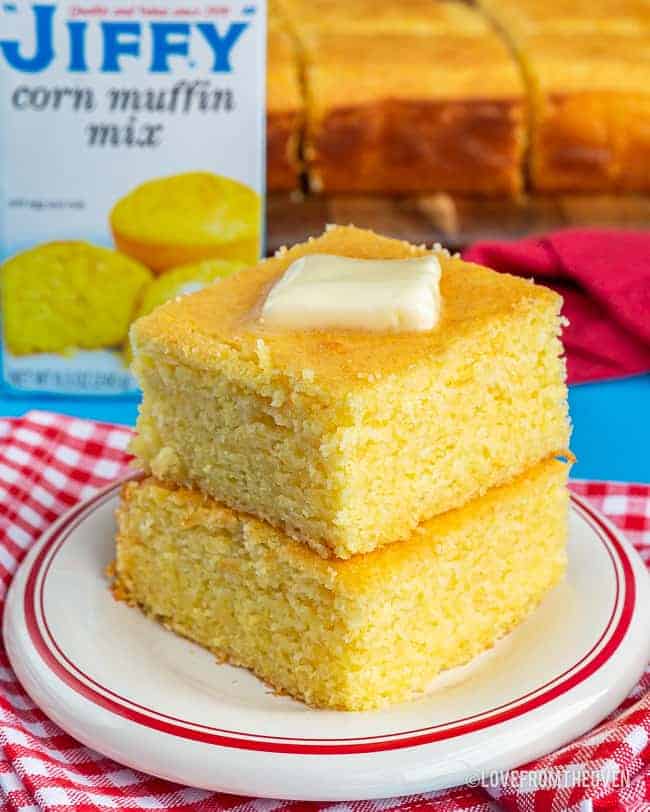 Reasons To Make This Cornbread:

With a little help from the classic Jiffy Cornbread Mix, this cornbread recipe produces the most flavorful and moist cornbread I’ve ever had. I would go as far as to stay that it puts my completely from scratch cornbread to shame! You read that right, this is better than any completely from scratch cornbread I’ve ever made. And just to add a disclaimer, this post is in no way sponsored by Jiffy, I’m just super in love with this recipe!

So often, cornbread is a bit on the dry side. It’s a very common problem. Not this cornbread. Two days after I first made this cornbread, it was still moist. If there is such a thing as magical cornbread, this just might be it. 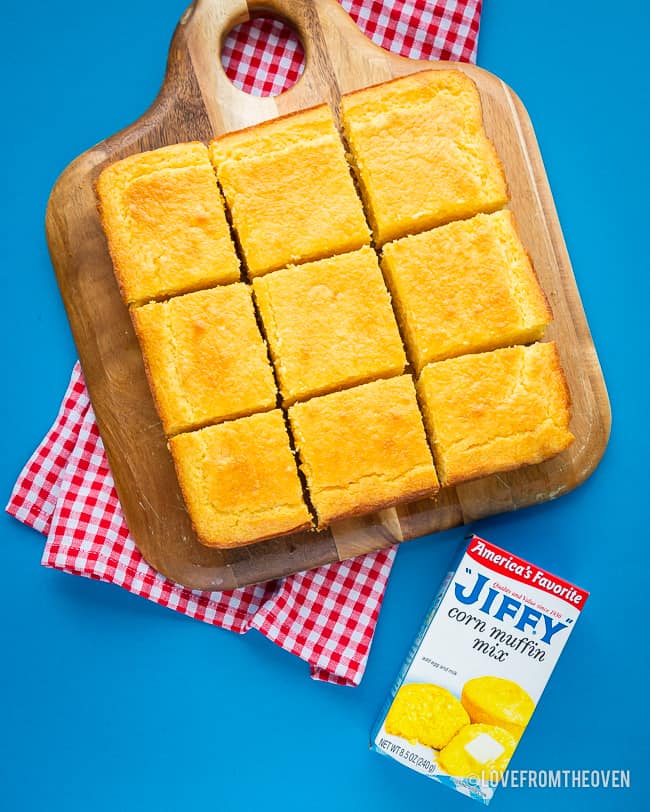 While I like cornbread, I’ve never felt like I LOVE cornbread. Well that has changed. I’m not exaggerating when I say I ate the leftovers of this Jiffy Cornbread for breakfast the day after I made it. And I’m not lying when I say I was pretty darn sad when it was gone.

This Jiffy Cornbread Recipe will be whipped up often in my kitchen from here on out. Who would have thought that those iconic little boxes of Jiffy Cornbread Mix would, with some doctoring, produce such a spectacular result. Truth be told I didn’t exactly expect to be wowed by this, or any, cornbread recipe. So the fact I’m practically singing it’s praises, that says something! 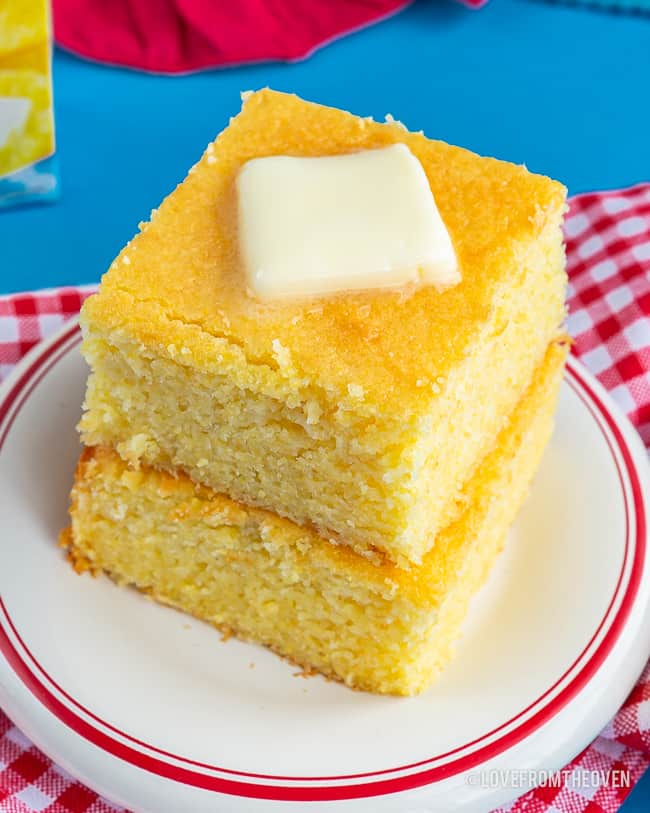 To make this recipe, you are going to set the Jiffy cornbread directions on the box aside. We’re taking this cornbread to a whole other level. I cannot wait for you to try this recipe, it’s THAT good. 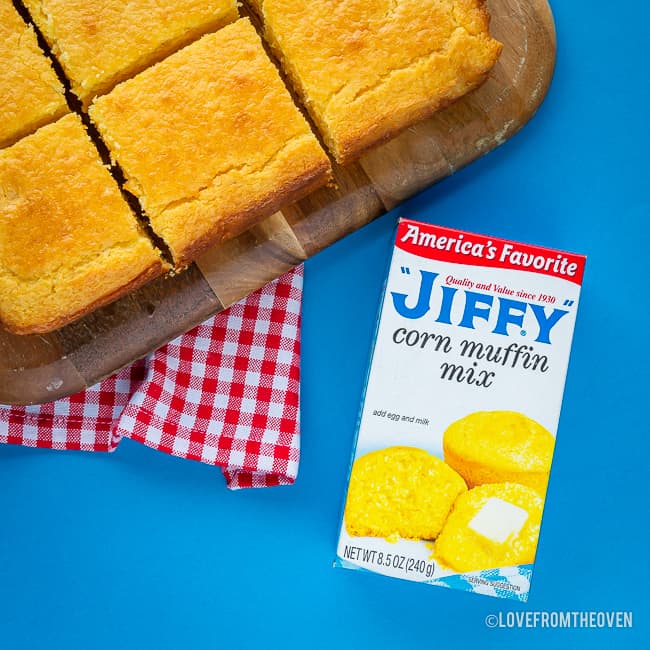 I prefer my cornbread on the sweet side. Not overly sweet, but with a hint of sweetness. If you prefer, you can leave out the sugar in this recipe. You’ll still have a great result, just slightly less sweet.

Ingredients At A Glance

Those ingredients will simply be mixed together by hand, then the batter gets poured into a 9×13 baking pan and popped in the oven. Super simple here, perfect for when you need to be more hands on with other dishes for a meal. 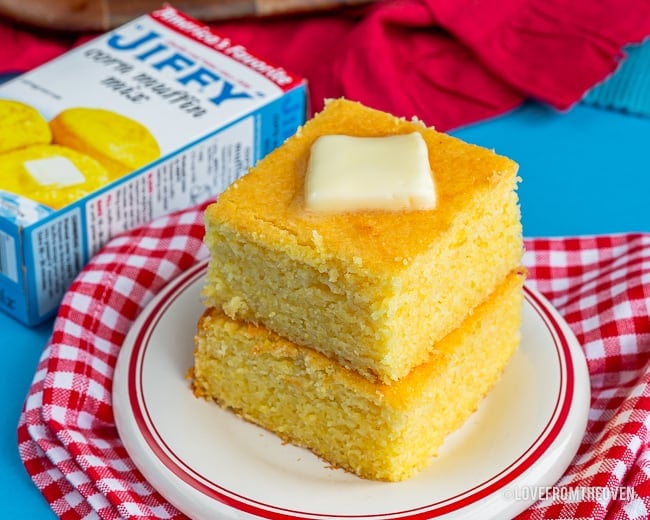 What To Eat Cornbread With

Look, eating this cornbread all on it’s own is one heck of a delicious thing to do. Or better yet, top it with honey butter! However I do understand you might want to pair it with some other food items.

This would pair wonderfully with Maple Brown Sugar Pork Tenderloin. It would make a great Sunday dinner, especially when you include some Easy Glazed Carrots.

For the ultimate in comfort food, pair this Jiffy Cornbread with Crockpot Beef Stew or Chicken Pot Pie Soup. For a classic combo, pair it with Crockpot Baked Beans. It’s hard to go wrong with a great cornbread recipe, isn’t it? 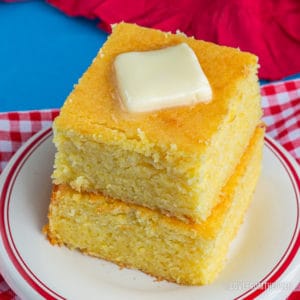 5 from 84 votes
Author Christi Johnstone
Course Side Dish
Cuisine American
If you love Jiffy Cornbread, wait until you try this absolutely irresistable Jiffy Cornbread Recipe. Skip the instructions on the box, this is the recipe you want for the most amazing, moist and delicious cornbread ever.
Print
Pin It
Share
Save Saved!
Prep Time 5 mins
Cook Time 25 mins
Total Time 30 mins
Servings 12 servings

This moist and delicious cornbread is great served with butter and honey.