Magnolia Bakery Banana Pudding might just be the most popular pudding ever! What makes this banana pudding recipe world famous? It’s the combo of amazingly light and creamy pudding with layers of fresh bananas and crunchy vanilla wafers. Together these delicious ingredients create an irresistible dessert that everybody loves! 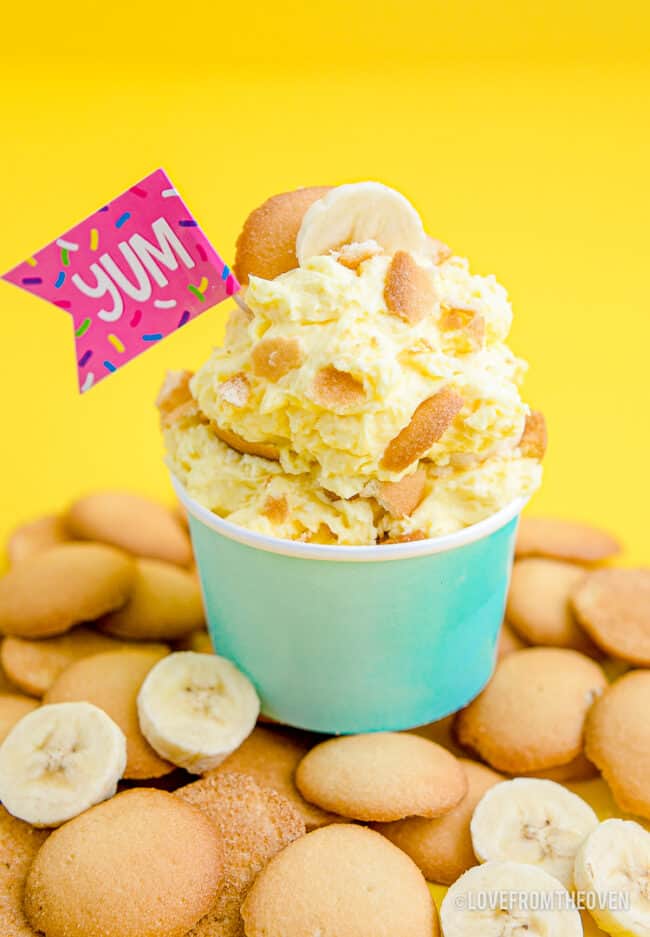 Reasons To Make This Banana Pudding With Nilla Wafers 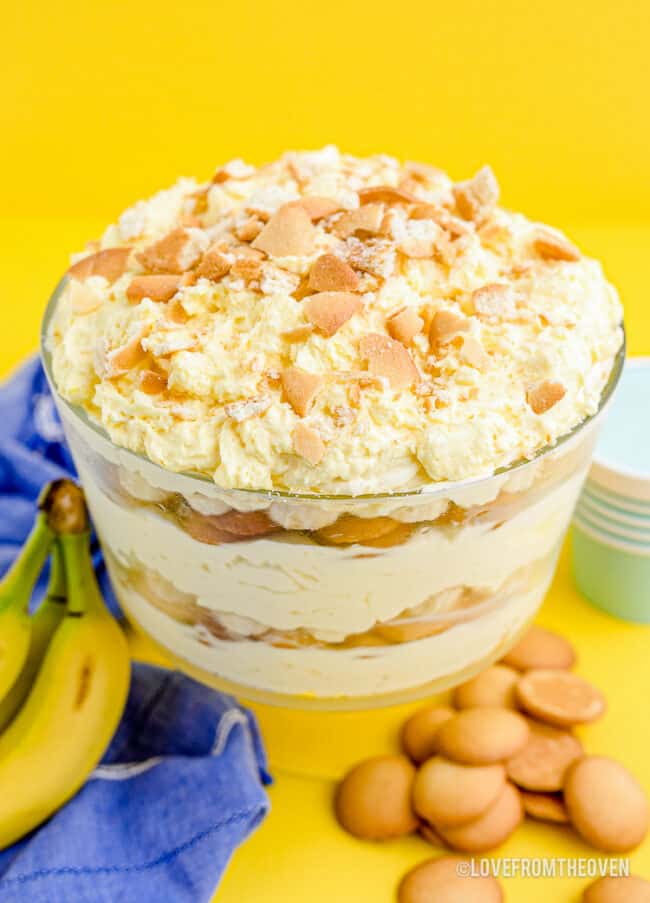 If you are looking for an easy-to-make, no-bake summer dessert, then look no further. Last year the famous Magnolia Bakery shared the recipe, online and in their cookbook, for their wildly popular banana pudding. Ever since trying it, we simply cannot get enough of this light and fluffy, flavorful pudding.

We love banana recipes, and this is no exception. From Banana Bread Pudding to Easy Chocolate Banana Cake, Banana Bread Muffins to Banana Pancakes, bring on the bananas! 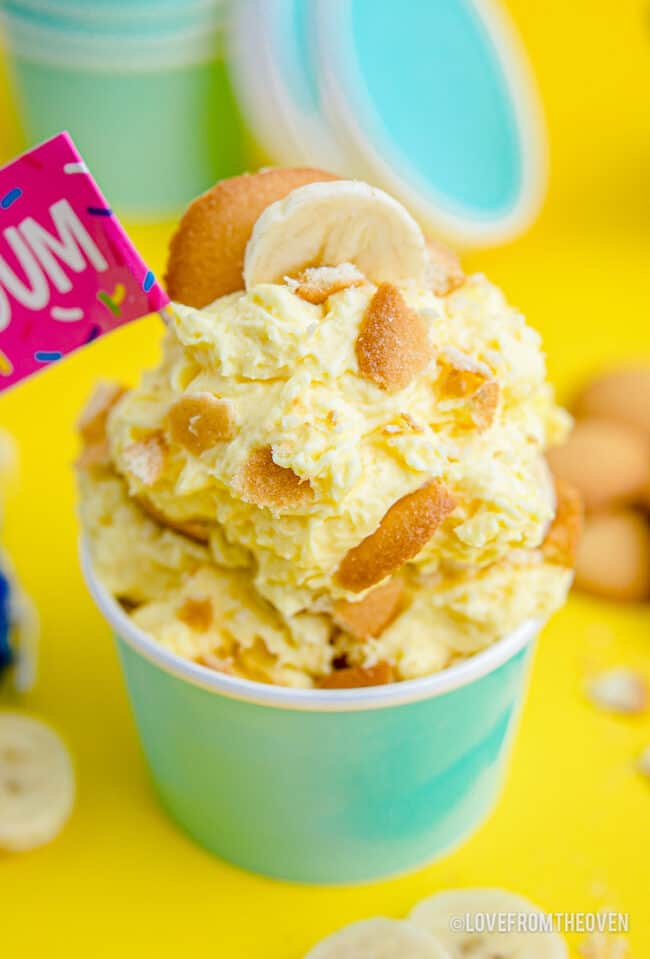 Not only is this Magnolia Bakery Banana Pudding recipe delicious, you can easily make the pudding portion in advance. Whip up the pudding one day, then assemble and add the cookies and bananas just prior to serving the following day.

Another great thing about this easy banana pudding with nilla wafers is that it can be served in one large serving dish, or in individual cups or bowls.

No matter how you prepare or serve it, be prepared for this tasty dessert to be devoured! 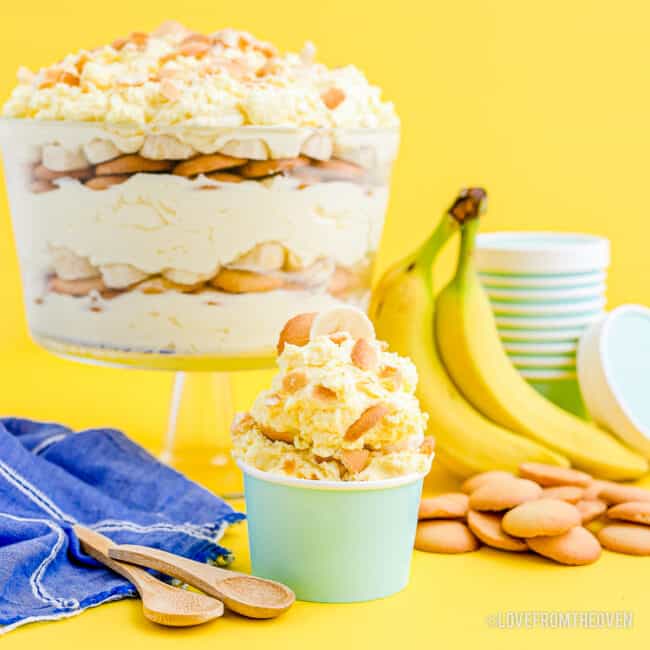 Get ready for the compliments when you dish up this banana pudding!

Please keep in mind that the full printable Magnolia Bakery Banana Pudding Recipe, with exact measurements and instructions, can be found at the bottom of this page.

This portion of the post is just for discussion, tips, and answering common questions you may have about the recipe. I work hard to give you helpful information so that you can have great results in your kitchen. However, if you just want the recipe and nothing more, you’ll find it at the bottom. Enjoy! 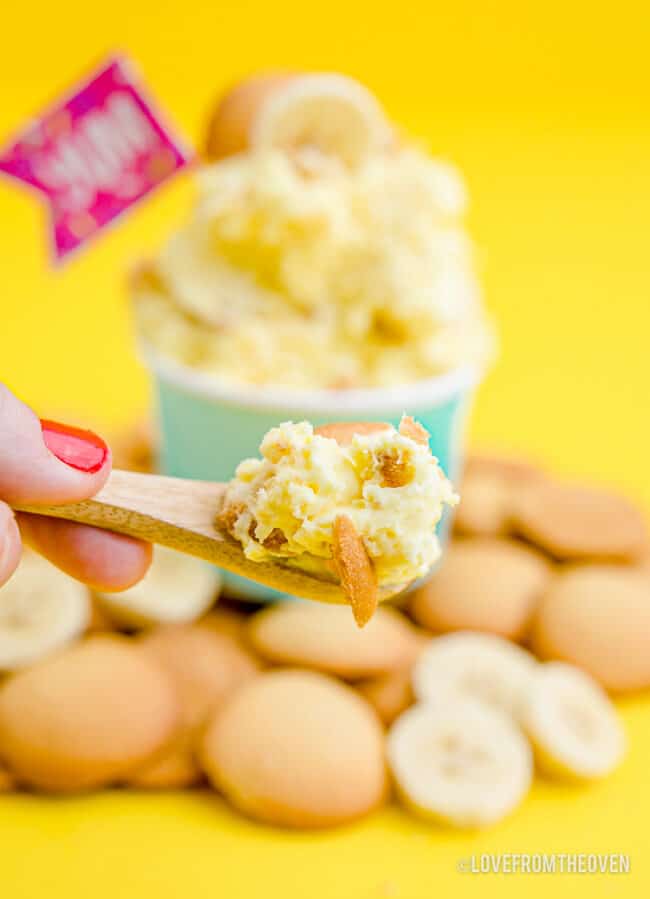 What You Will Need

To make this recipe, start by combining the sweetened condensed milk and ice cold water. Next, add the dried pudding mix and mix with a mixer until smooth. At this point the pudding mixture needs to be covered and placed in the refrigerator for at least three hours. It can be left in the fridge overnight. 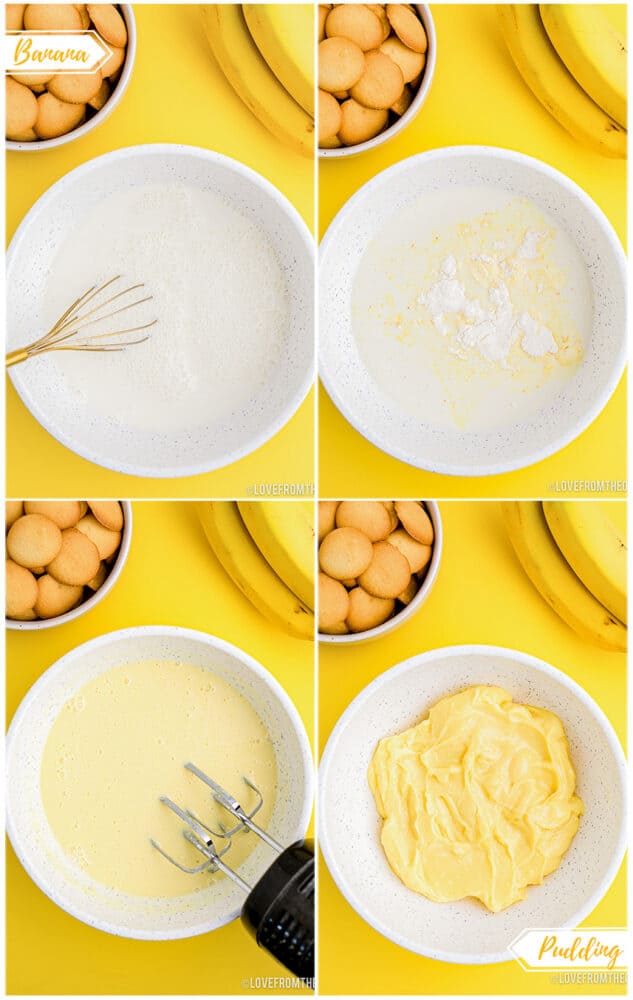 After the banana pudding has had time to chill and set, it’s time to make the whipped cream. Whip cream is made by beating the whipping cream until stiff peaks form. Then vanilla extract is added and folded in gently.

Next, the chilled banana pudding is folded into the whipped cream, to create an unbelievably creamy and fluffy pudding. Once these have been combined, an additional five tablespoons of dry vanilla pudding mix are added to the mixture to finish.

Now that the Magnolia Banana Pudding is made, it’s time to assemble it with the bananas and cookies. 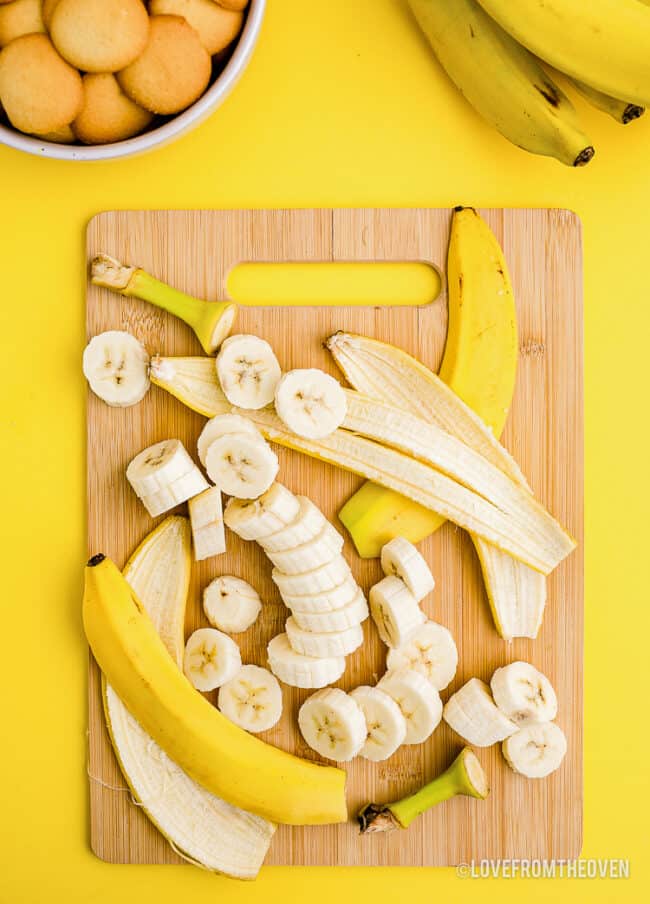 It’s recommended that you cut the bananas just prior to serving. Bananas can brown very quickly, and while that won’t change the taste, it isn’t always the most ideal from a visual presentation standpoint.

After assembling, chill for at least 4 hours to allow the vanilla wafers to soften up. Garnish with Nilla wafers crumbs and sliced bananas as you are serving. 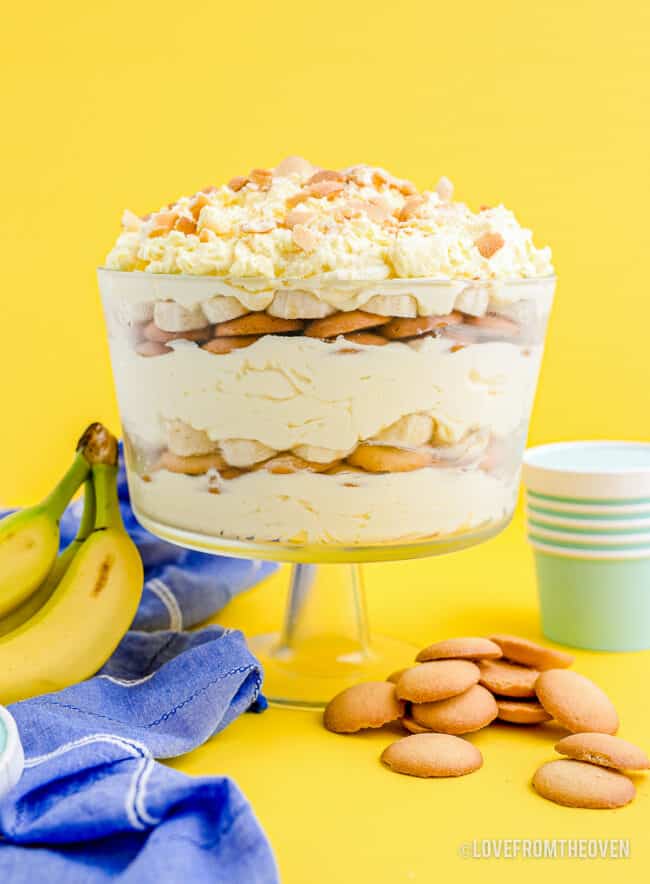 Tips For Making This Pudding

Make in advance. You may want to make the pudding part of the recipe the night before assembling this dessert because it does take time to set up.

If your bananas are too ripe, they will brown very quickly, better to use some that are just barely ripe, still green on the stem. Brown will still taste fine, but not look as nice. I saved half a banana and a few nilla wafers for garnish on the top for serving. 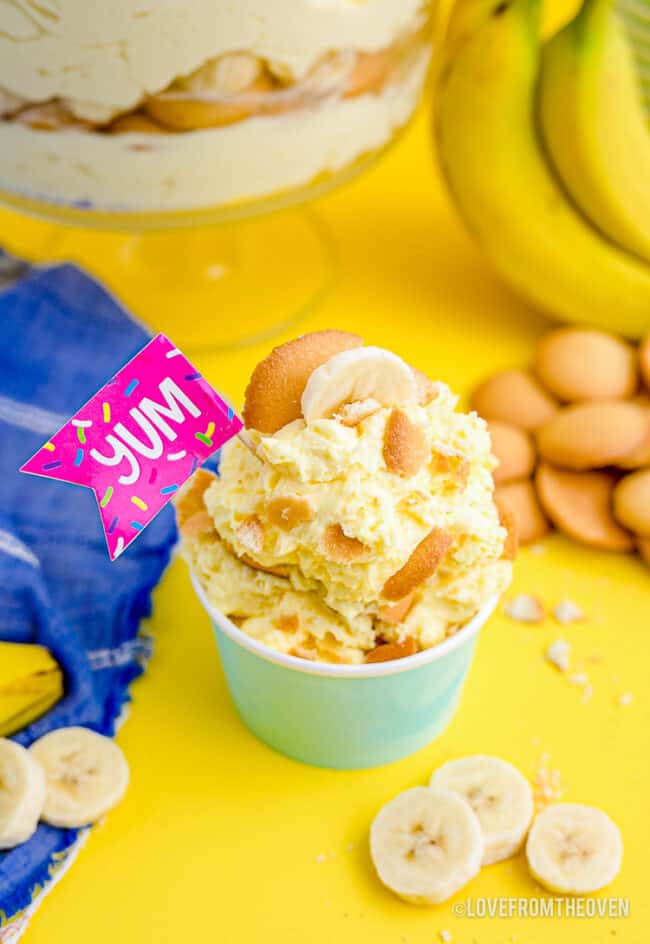 You may keep this pudding in the fridge for 3-4 days. It does not freeze well because the bananas will turn brown and mushy. 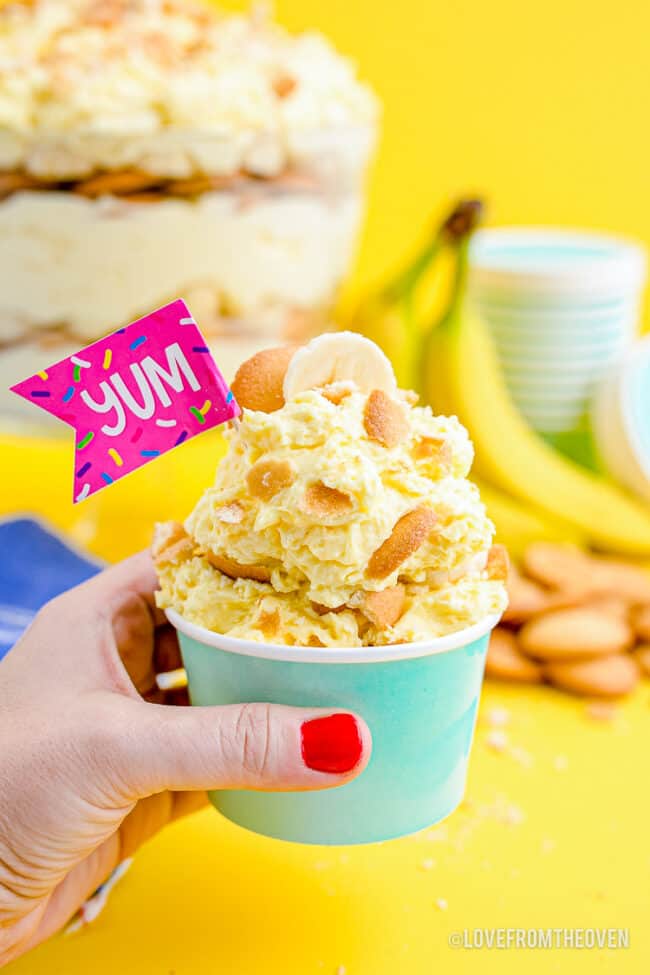 Can I make this ahead of time? You can make up the pudding, and then mix it with the whipped cream. This will keep well in the fridge. But it is best not to assemble the dessert with the bananas more than a day ahead of time. Over time the bananas will start to turn brown.

Can I make this pudding in individual servings? Yes! You could just divide the pudding evenly between your small bowls, do a layer of Nilla wafers, a layer of bananas, repeat this if the bowls are tall enough. Finish with a layer of pudding.

I don’t have a clear glass trifle bowl – what else could I use? Any large bowl will work. I like a glass bowl just because it looks so pretty.

I don’t have an electric mixer – what do you recommend? You could either use a standing mixer or whisk by hand, really well. 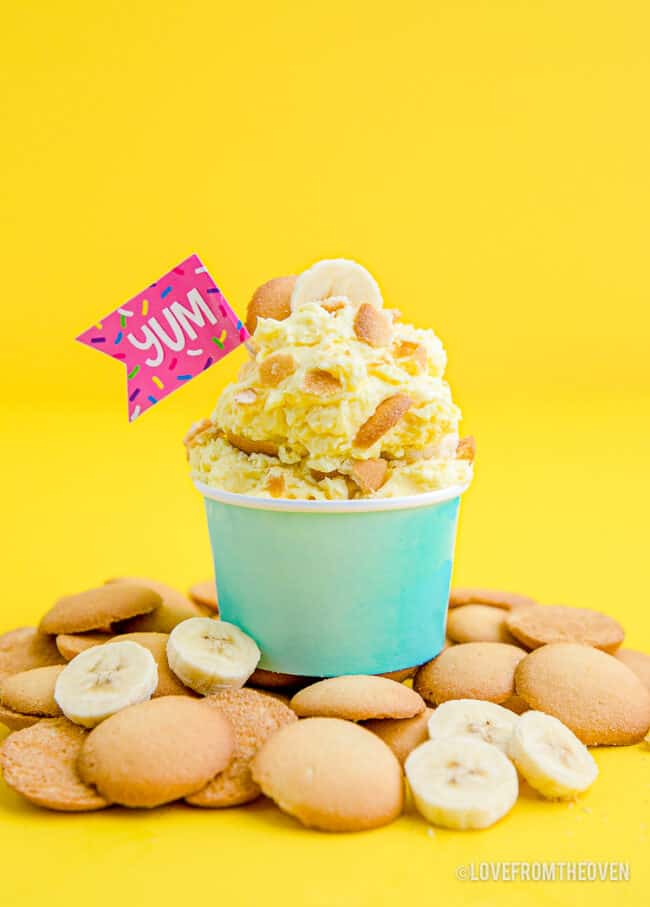 Still have more bananas on hand? I’ve got you covered with these delicious recipes! 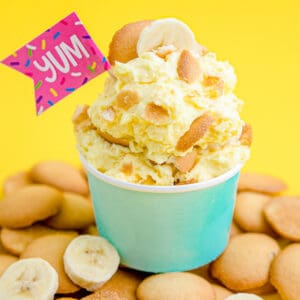