These easy Homemade Brownies are everything you love about brownies. With a rich chocolate flavor, decadent fudgy texture and that crackly, shiny crust, this homemade brownie recipe is a must have in your recipe collection. If you’ve never made brownies from scratch, you’ll be surprised just how easy it is to make homemade brownies!

Homemade brownies might be one of my all time favorite desserts. It doesn’t matter if they are served cold or a la mode, either way, I love them!

This recipe for Homemade Brownies makes the best brownies I’ve ever had, and that’s not something I say lightly. These brownies are not overly sweet, especially when made with a dark cocoa powder.

Rich, decadent, chewy and utterly delicious are the terms I would use for these brownies.

However these homemade brownies are also incredibly easy to make. Because these brownies are made with cocoa powder, there is no chopping or melting of chocolate required. Therefore there is a good chance you already have the ingredients you need in your pantry!

How Do You Make Homemade Brownies?

Once upon a time my brownies always came from a box brownie mix. One of the reasons I avoided homemade brownie recipes was because they always seemed to call for unsweetened chocolate.

While I have nothing against unsweetened chocolate it’s just something I don’t keep on hand. Therefore I often skipped making homemade brownies.

This homemade brownie recipe however doesn’t require any baking chocolate and all you have to melt is some butter in the microwave.

What Ingredients Do You Need For Homemade Brownies?

What Kind Of Chocolate Do You Use In Homemade Brownies?

When it comes to cocoa powder, I have two particular cocoas that I prefer. My every day go to cocoa powder is Hershey’s Special Dark Cocoa Powder. Most of the time I can find this at a local supermarket.

That said, I usually stock up on it at Amazon. Another cocoa powder that I’ve fallen in love with is Rodelle Gourmet Baking Cocoa.

Both of the cocoa powders that I recommend are, at least partially, Dutch process cocoa powder. The Hershey’s Special Dark Cocoa Powder is a blend of natural and Dutch-process.

It’s made from the processed cocoa solids, which are ground into a fine powder. It tends to be light in color and have a slightly acidic taste.

Consequently, from a scientific standpoint it works well in recipes that use baking soda as their leavener. The acid in the natural cocoa powder reacts to the base in the baking soda to create carbon dioxide bubbles that help your recipe rise.

Dutch process cocoa has been processed to help neutralize the acid in natural cocoa powder. Because of this it has, according to some taste buds, a richer, smoother more pure chocolate flavor.

Dutch process cocoa often has a bit of a reddish coloring, which you can see reflected in my homemade brownies.

Dutch process cocoa is usually found paired with baking powder, which has a neutral pH. For baking recipes you want to pay attention to the pairing of baking soda, baking powder and your cocoas. For recipes like chocolate sauces or puddings, you can really just go with what your taste buds prefer.

Dutch process cocoas aren’t as common in the grocery store, though my beloved Hershey’s Special Dark Cocoa Powder is a combo of Dutch and natural cocoa powders. My local Safeway and Albertsons stores often carry it, so I use it often in my baking.

I’m currently in love with Rodelle’s Gourmet Baking Cocoa, which is a Dutch process cocoa. I’ve never seen it in store, so it’s an Amazon order item for me.

There are a really wide variety of Dutch process cocoas on the market. I haven’t tried many of the ones available due to a nut allergy in the house.

If you have nut allergies in your family, make sure to always check your cocoa for may contain or made in a facility warnings. But the sky is the limit when it comes to variety with Dutch process cocoa.

This recipe is almost the same as my recipe for Brownies Made With Cocoa Powder. The main difference is that I’ve found some ways to simplify the process.

For that recipe I use a double boiler method for combining my ingredients. Well it turns out we can skip that and short cut it with the microwave. I’m all about less work, and fewer dishes.

How Do You Make Brownies With A Shiny Crust?

Everyone loves a shiny top brownie, especially when it’s also a brownie with a crackly top. Disclosure, I’m not sure if crackly top brownies is a term, maybe a cracked top? A wrinkled top? I have no idea what we are officially calling them!

That said, this recipe has been very dependable at producing a brownies with a shiny crust and that lovely crackly top.

If you read across the internet there are many theories as to how you get shiny top homemade brownies. Some people agree on what creates a shiny brownie crust, others contradict.

For me, I find the combination of melted butter, a lot of mixing, and adding chocolate chips, works like a charm.

Can You Over Mix Brownies?

For whatever reason I’ve always been afraid of over mixing brownies. Even box brownie mixes tell you not to over mix. It is true that when all ingredients are combined, you do not want to over mix.

Over mixing your brownies once the flour is introduced can make the gluten get a bit too worked up, and result in tough brownies.

But what you do want to do is mix your butter, sugar and eggs together very well. When I say very well, I mean probably for longer than you think. Mixing for 3-5 minutes with an electric mixer is ideal.

In my opinion, this really helps with that whole shiny crust on brownies thing. Look at those shiny brownies right there!

CLICK HERE TO PIN AND SAVE THIS
HOMEMADE BROWNIES RECIPE 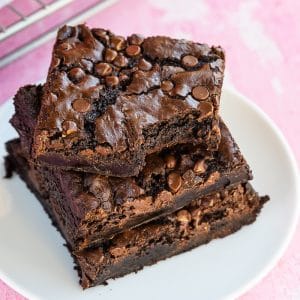 5 from 13 votes
Author Christi Johnstone
Course Dessert
Cuisine American
These rich, delicious and chewy homemade brownies are surprisingly easy to make! If you are looking for a bakery style brownie with a shiny crust, this is it! Made with cocoa powder, there is no melting of chocolate is required.
Print
Pin It
Share
Save Saved!
Prep Time 20 mins
Cook Time 30 mins
Total Time 50 mins
Servings 16 brownies

Can’t get enough brownies? I feel that. Here are some other great brownie recipe you will want to try!