Sometimes you just have to go totally over the top with a dessert. This is one of those times. Let me introduce you to Peanut Butter Crunch Brownie Mousse Pie {also known as the birthday dessert I made my hubby}… 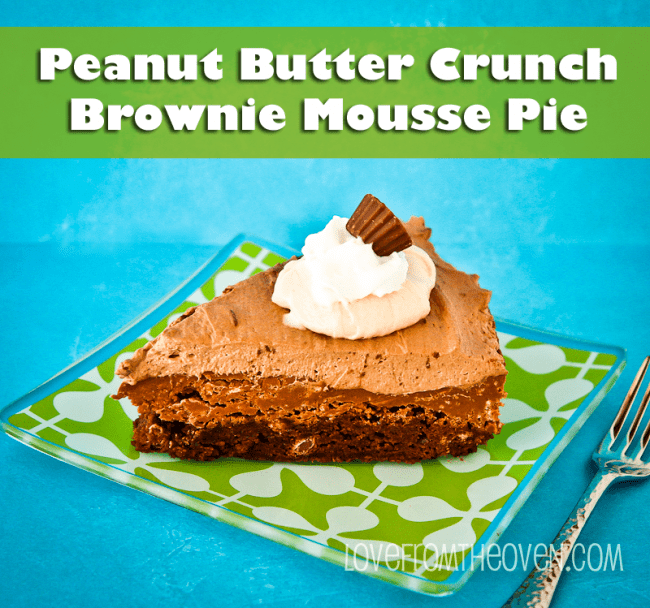 Did I mention it’s over the top, just a little bit? This dessert was inspired by a dessert made by the incredibly talented Chef Joe DiPaolo that I enjoyed last year while visiting the Duncan Hines Test Kitchen. 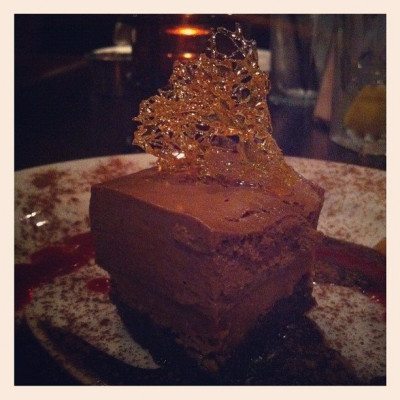 You can actually see Chef Joe creating his version in a post I did about my visit to Duncan Hines.  While I don’t have Chef Joe’s exact recipe, I remembered the important players in this delicious dessert – a layer of brownies, a layer of chocolate mousse and an amazing layer of a peanut buttery, chocolatey, crunchy delightful-ness.

I’ve been wanting to recreate this ever since I first tasted it, and finally got around to it for my hubby’s birthday this week – he loves peanut butter and brownies, so this was an easy choice. Chef Joe’s version included crunch from a delicious pure butter flake known as Feuilletine. Let that sink in for a moment. Crunchy. Butter. Flakes. While I did consider ordering a 5+ pound box of this golden goodness, I had a fear that having five pounds of Feuilletine around would probably result in me having an extra 15 pounds around (literally), so I passed and instead used corn flakes in it’s place. While it doesn’t have that exact buttery goodness, trust me, nobody will care, because it’s so crazy good, even with corn flakes. We just won’t go so far as to call it Corn Flake Pie, it’s more of a secret ingredient type of situation. 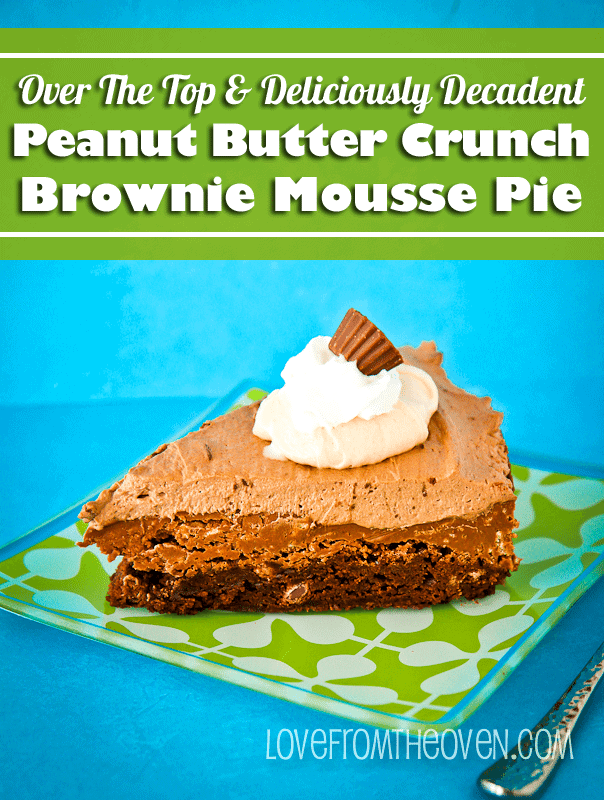 Making this is really pretty simple. You start with a boxed brownie mix (you can use homemade if you like). If you have a springform pan or a pan where the sides will come off, that is a good choice for making this. The peanut buttery crunchy goodness hardens, and can try and become one with the pan, but you can always cut it out like a pie as well. So you start by baking your brownies according to the package directions. I baked mine into a 9″ round springform pan.  After your brownie has cooled, it’s time to top it with the crunchy peanut butter layer. 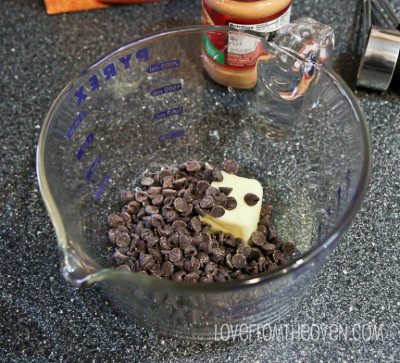 I started by melting my butter and chocolate chips in the microwave. Once they were melted I added in my peanut butter and my cornflakes. I crushed my cornflakes in a Ziploc bag. Not too fine, you want some crunch to remain. 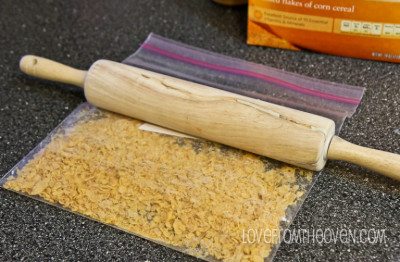 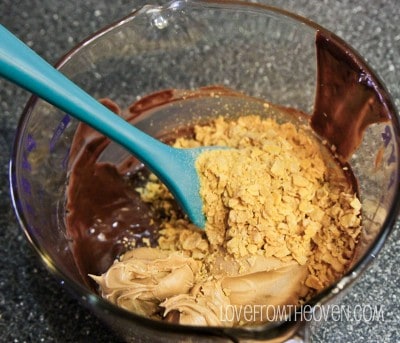 And that delicious layer is going to go onto your cooled brownie layer (so you are not taking the brownies out of the pan).

And now it’s time to make the mousse. I kept the mousse very simple – just some chocolate, some milk, some marshmallows (I used chocolate but you can use regular) and whipping cream. 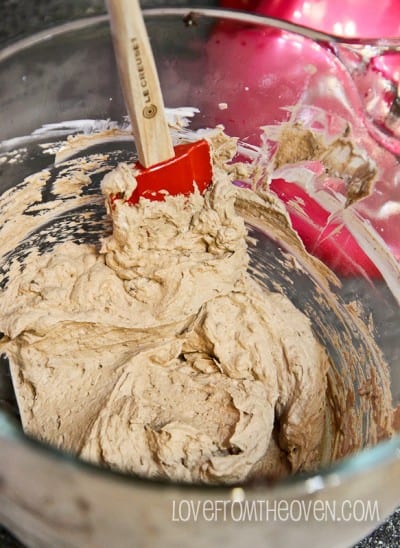 And then the mousse goes on top of the crunchy peanut butter layer. Hey,  I told you this was over the top. 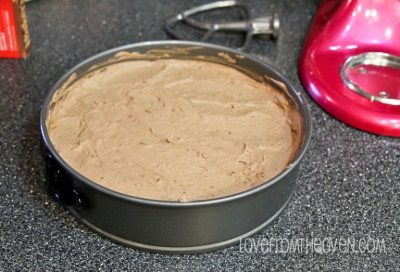 And into the fridge it goes for a few hours. And if you are like me, and pretty much lack any self control when it comes to a bowl of mousse, you can go sit and recover from the sugar shock from licking the bowl afterwards. Or you can go do a workout video on Netflix. That’s probably the better choice here. So after a few hours, out of the fridge, take off the sides of the pan, and you have one of the richest desserts ever.

And if for some reason the 39,986 calories per serving isn’t quite enough, go ahead and top each slice with a dollop of peanut butter buttercream (just add some peanut butter to your favorite buttercream frosting – good stuff, let me tell you), a bit of whipped cream and a mini peanut butter cup. There, now you’ve hit 40,000+ calories per slice. Birthday calories don’t count, right? Oh, wait, that’s probably not true with other people’s birthdays, but the theory sounded good. 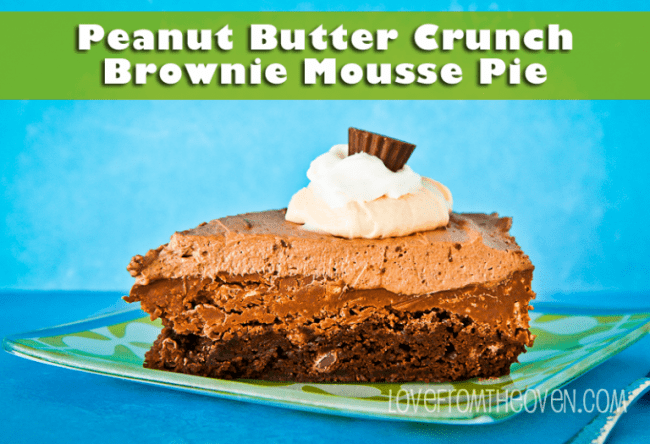 I promise, this really is quite simple to make, for being such an incredible special occasion dessert. Now if you’ll excuse me, I need to go trade my jeans for some nice loose yoga pants…

No ratings yet
Author Christi Johnstone
Print
Pin It
Share