Cinnamon Rolls just got quicker and easier with this delicious No Yeast Cinnamon Rolls recipe. There is no need for proofing, rising or waiting, simply mix up your ingredients, assemble, bake and enjoy every single bite! 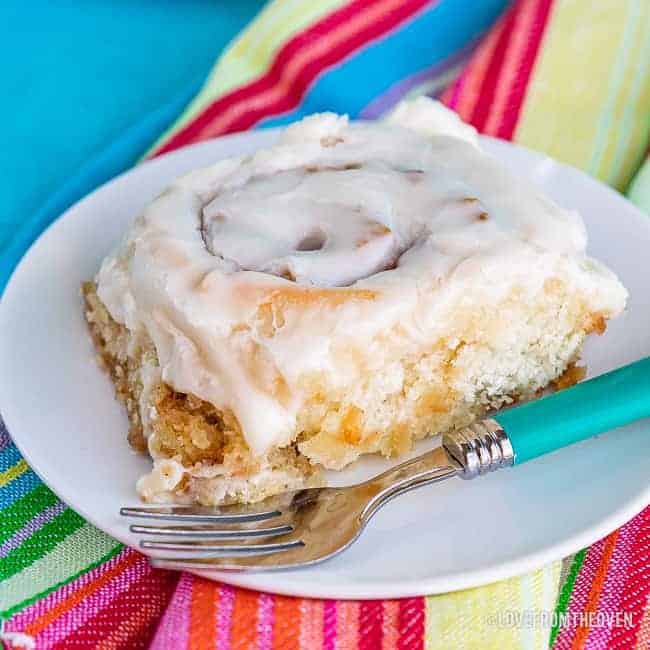 Cinnamon rolls are one of the most loved baked goods around. What’s not to love? A delicious sweet bread with swirls of buttery brown sugar filing, topped with frosting. 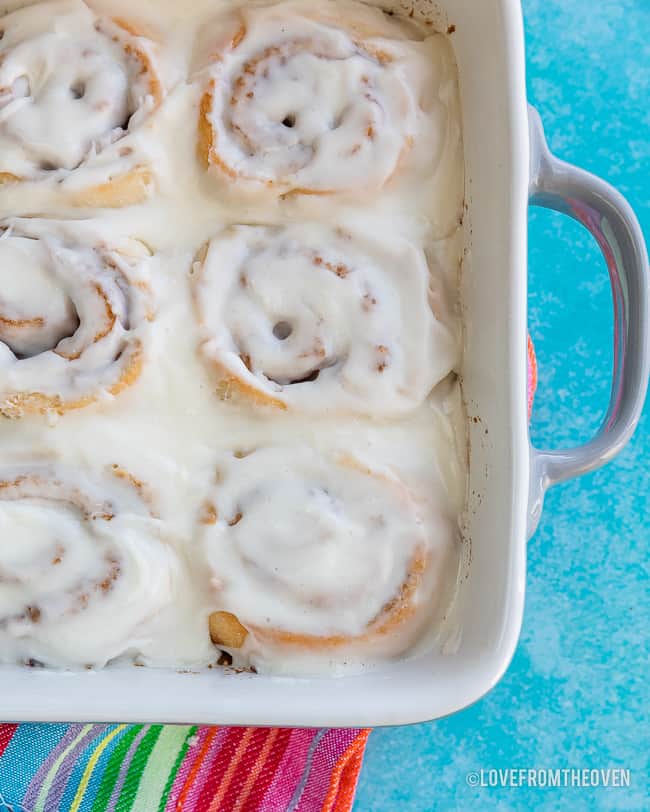 Actually when I think about it, there is one thing I don’t love about cinnamon rolls… the time it can take to make them. Proofing the yeast, waiting for the dough to rise once, then twice. Making some cinnamon roll recipes can sometimes be an all day event, and more often than not I just don’t have time for that. Additionally, I know some people just aren’t comfortable with with yeast, or don’t always keep it on hand. 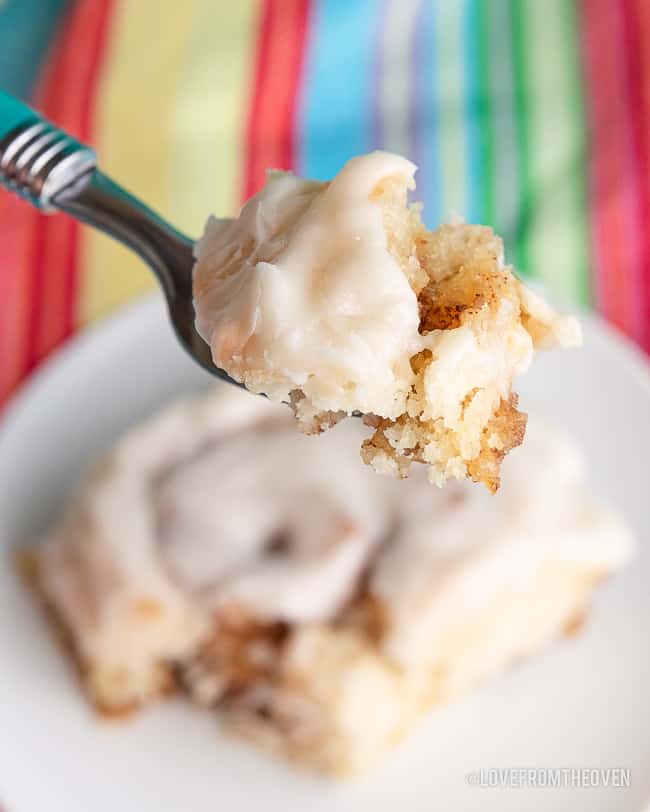 Well good news my friends, I have the perfect recipe for making fluffy, irresistible cinnamon rolls easily in no time!

Let me introduce you to my easy No Yeast Cinnamon Rolls recipe. You can have a pan of warm, gooey, delicious cinnamon rolls in less than an hour.

While I expected this recipe to be good, it honestly exceeded my hopeful expectations. It’s not always easy to remove the yeast and rise time from a recipe like this and be happy with the results. With this recipe I am thrilled with the results and I know you will be as well. 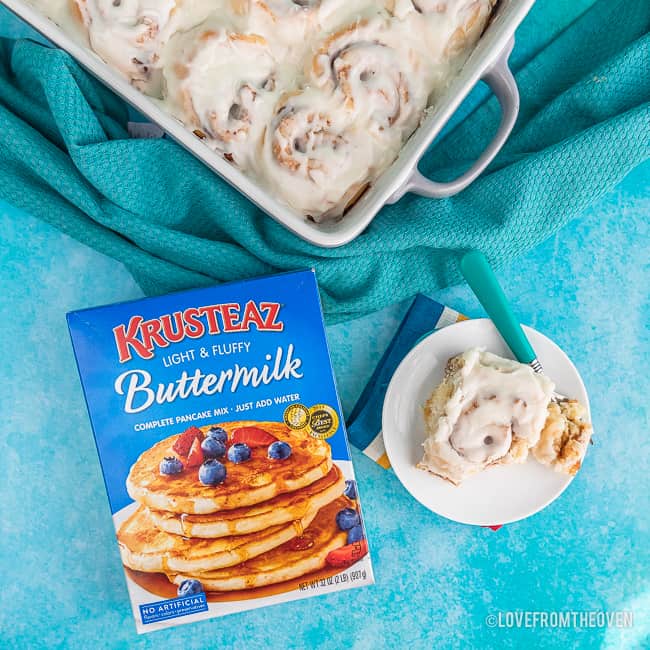 How To Make Cinnamon Rolls Without Yeast

So what’s the secret to to making cinnamon rolls without yeast? It’s Krusteaz Buttermilk Pancake Mix! Thanks to Krusteaz, you can whip up cinnamon rolls with minimal time, effort or planning. I love that Krusteaz Buttermilk Pancake Mix makes this SO easy and that they use delicious, quality ingredients, no artificial colors, flavors, or preservatives. Thanks to Krusteaz for sponsoring this post.

Even if you’ve never made cinnamon rolls before, I am confident you can make these and have great results that your friends and family will love. Let me walk you through how to make these quick cinnamon rolls. 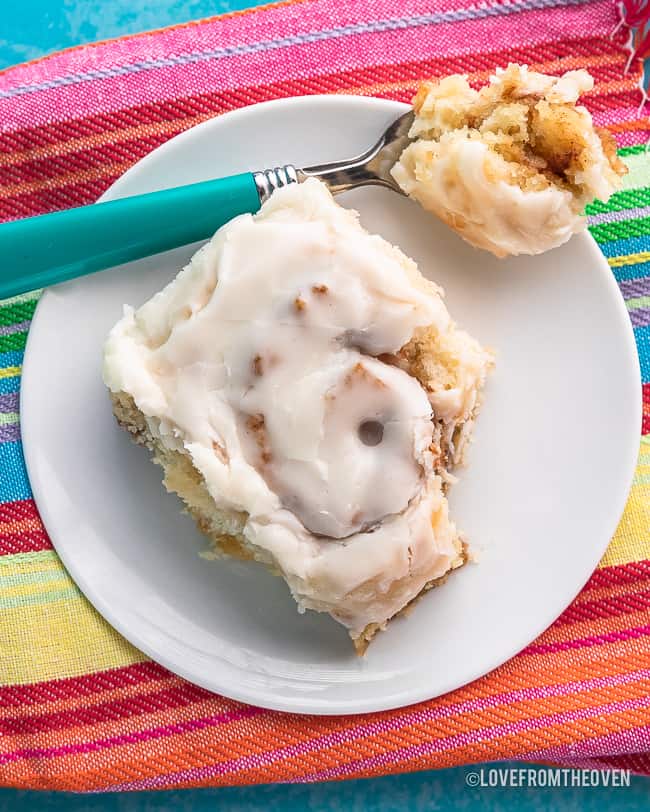 Ingredients At A Glance (full recipe at bottom of post)

To make these No Yeast Cinnamon Rolls in under an hour, you’ll need the following ingredients. Most of these are staples that you likely already have on hand. 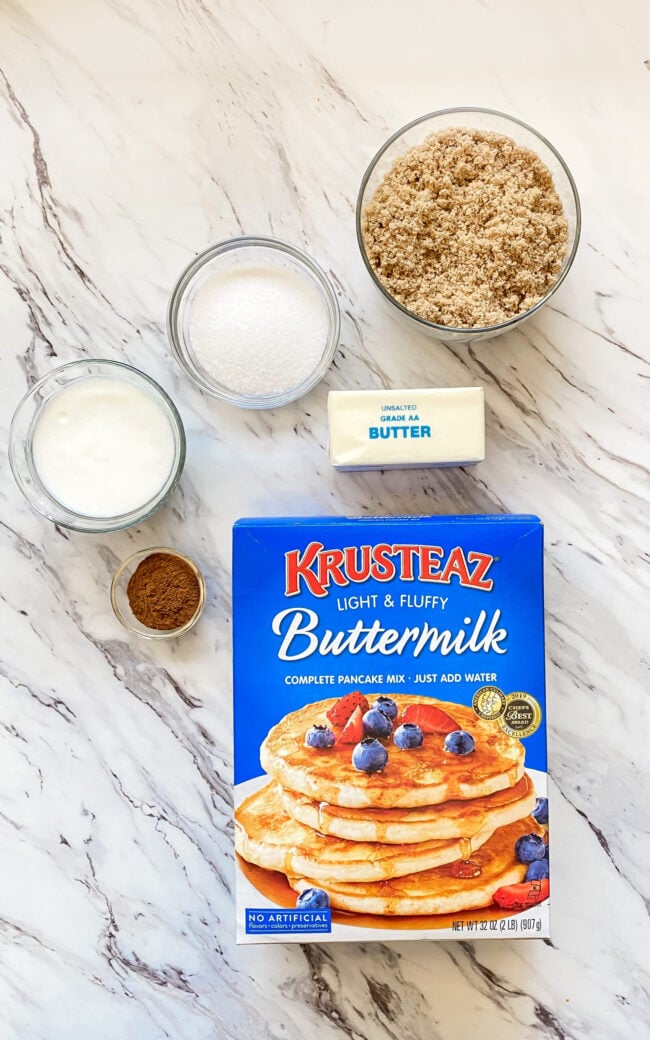 To make cinnamon rolls without yeast, prepare your dough, mix together the Krusteaz Buttermilk Pancake Mix, buttermilk and sugar together until a shaggy dough forms. When measuring your pancake mix, make sure to spoon the mix into your measuring cup with a spoon, then level it off. Don’t scoop your mix with the measuring cup as it will result in too much mix in your recipe, which will make the dough too dry.

Once the dough comes together, sprinkle your work surface with pancake mix, then work your dough into a ball and roll out into a rectangular shape. 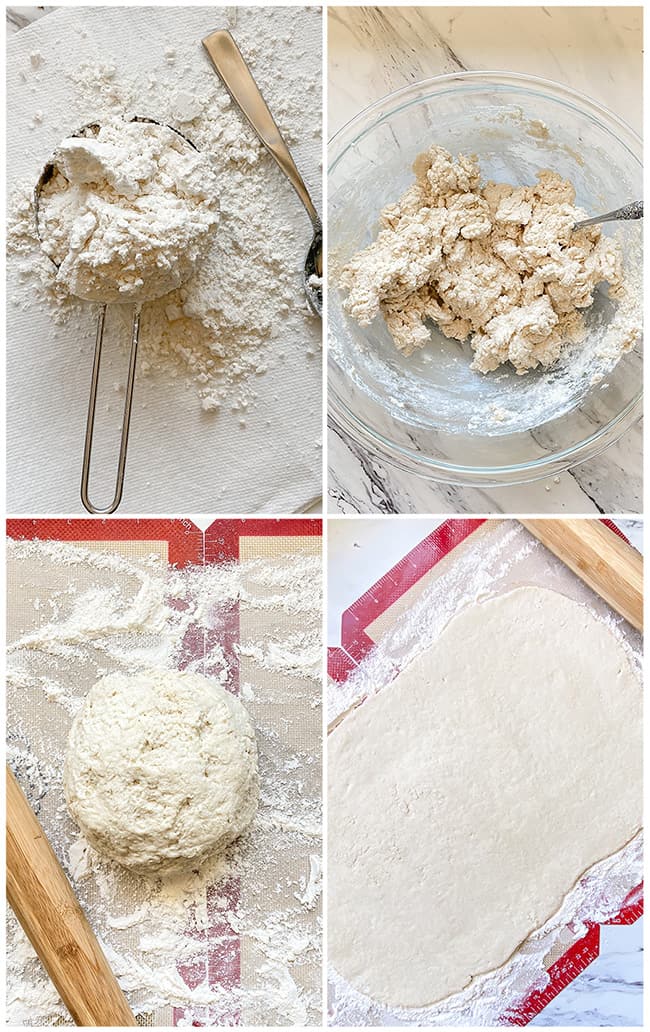 The filling is made by combining brown sugar, sugar, cinnamon and melted butter. That mixture is then spread across the cinnamon roll dough, which has been brushed with butter.

After the filling is evenly distributed over the dough, the dough is rolled up and cut into 12 pieces. Rolls are placed into a 13″ x 9″ baking pan that has been brushed with butter, then baked for approximately 25 minutes. 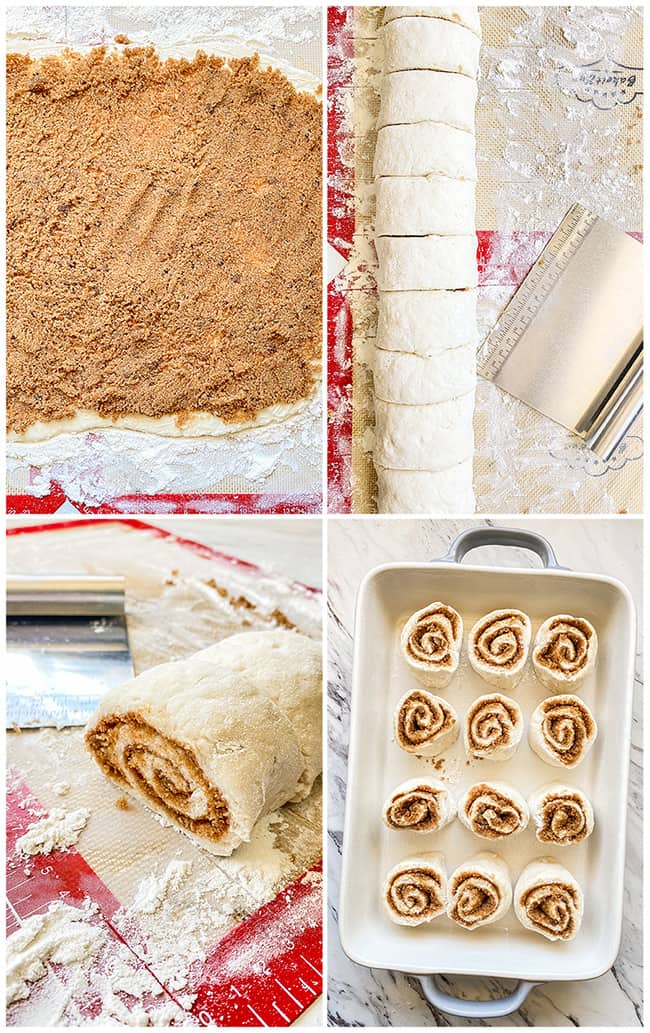 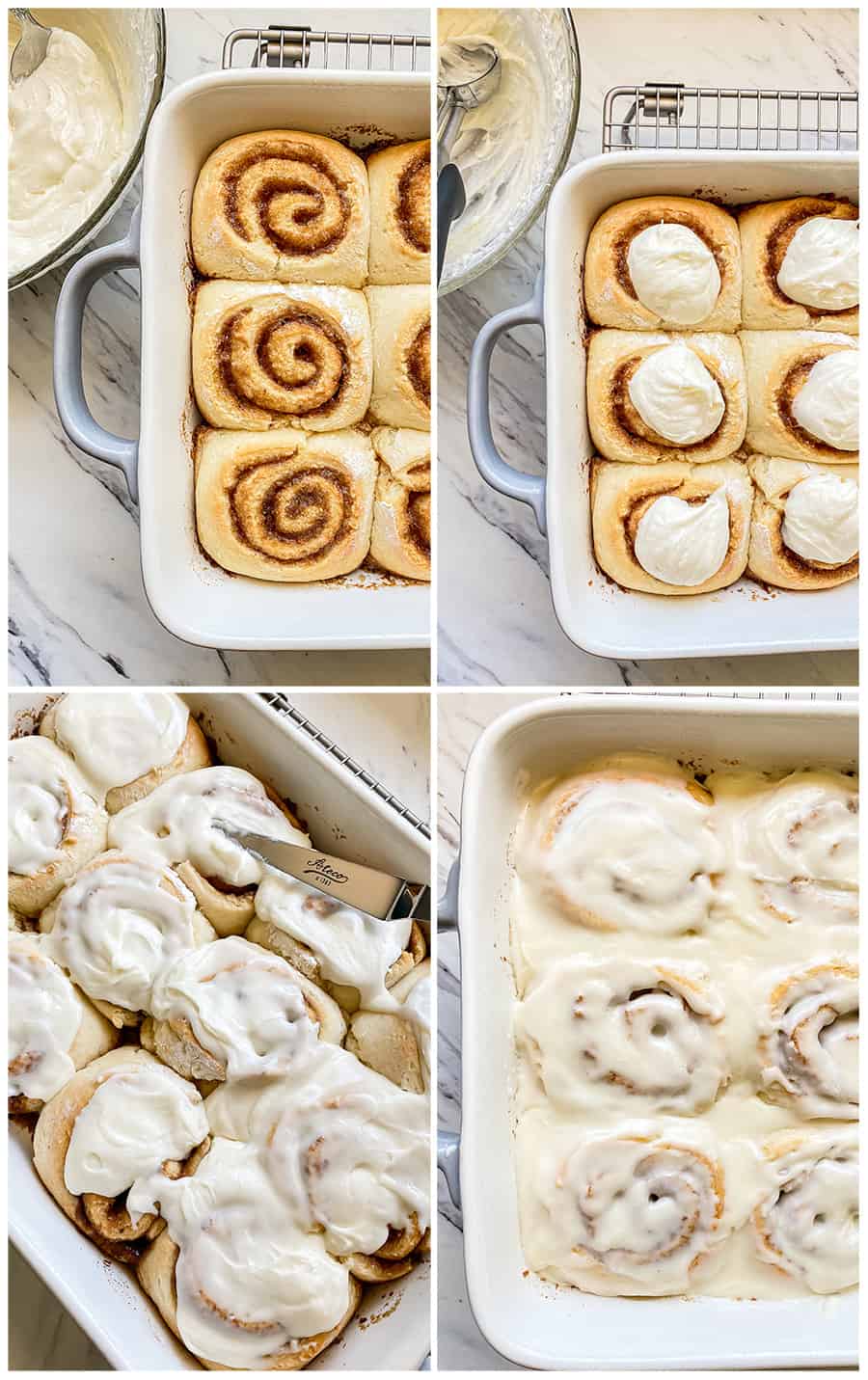 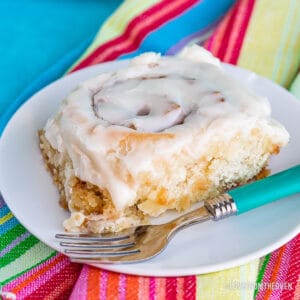 *Cream cheese should be of the brick variety, not the type that comes in a tub.  *Salted or unsalted butter works, as does light or dark brown sugar.