A rich chocolate brownie recipe that’s out of this world! Cosmic Brownies are made even better with the addition of silky chocolate ganache frosting poured on top.

Do you have a go-to brownie recipe when you want to wow? That one that you keep on stand by for any bake sale, pot luck or party that calls for a dessert everyone is guaranteed to love?

For me, this Cosmic Brownie recipe is it. I love how easy it is to mix the ingredients together–barely more work than opening a box of brownie mix–and how perfect they taste every time. For a long time I called these “One Bowl Brownies” because the batter comes together in one bowl.

Brownies are also the best dessert to make when you don’t have time to mess with frosting or decorating. The chocolate ganache on Cosmic Brownies gets poured over top without any fussing with frosting bags, but still looks (and tastes) impressive! 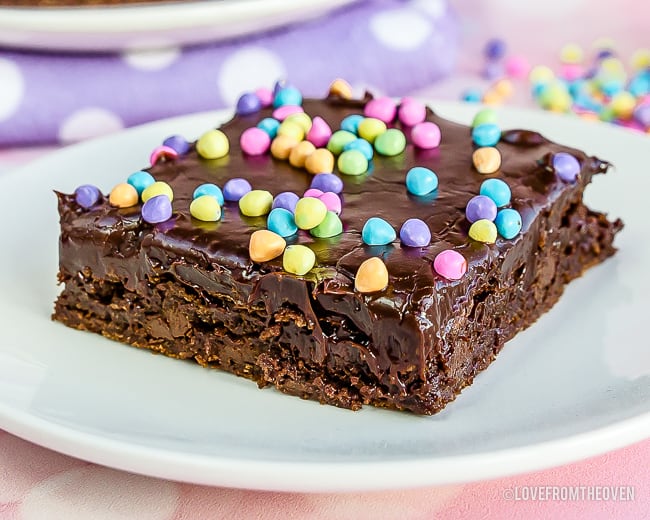 There’s nothing gimmicky about this brownie recipe; no secret ingredients or unusual variations. That said, there is nothing ordinary about Cosmic Brownies. The taste is extraordinary.

The Cosmic Brownie Recipe is also among the easiest brownie recipes to make. Unlike many other fudgey brownie recipes, you don’t have to melt chocolate to fold into the batter. It gets its chocolate taste from cocoa powder and, if you like even more chocolate in your brownies, whole chocolate chips.

I included this recipe in my book under the name “Out of this World Brownies” because they truly taste better than just about any brownie I’ve tasted on earth. These brownies are a chocolate lover’s heaven!

Wait until you try the chocolate ganache on these brownies! Made with a combination of milk chocolate and semi-sweet chocolate, this brownie icing adds the finishing touch to Cosmic Brownies.

To make the chocolate ganache frosting, you just melt the chocolate with warmed heavy cream, add butter and whisk everything together. The ganache gets poured right on top of the brownies. Easy as can be!

I love to top my Cosmic Brownies with plenty of multicolored sprinkles! Sprinkles are an optional garnish of course, but so much fun. When you don’t want to mess with complicated decorating, sprinkles are the perfect way to add a pop of color to your brownies.

I used these rainbow chip sprinkles. Mine were purchased last year when there was a pastel option, but unfortunately I can’t find those at the moment. 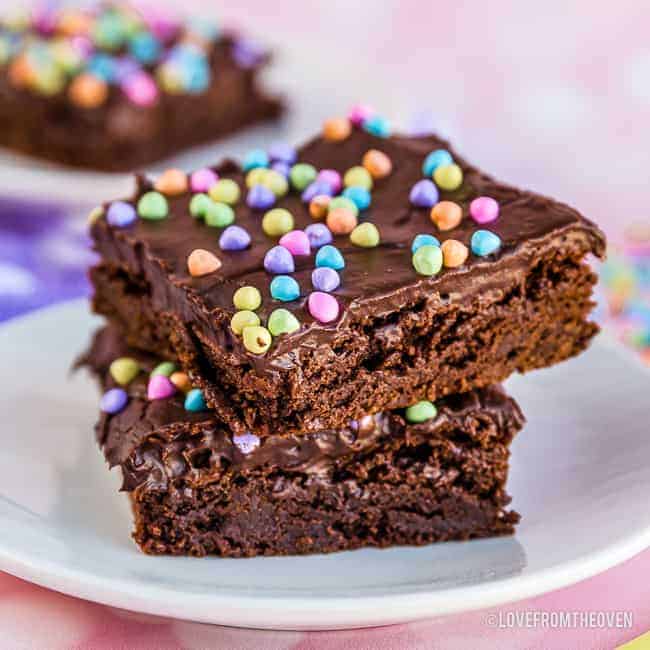 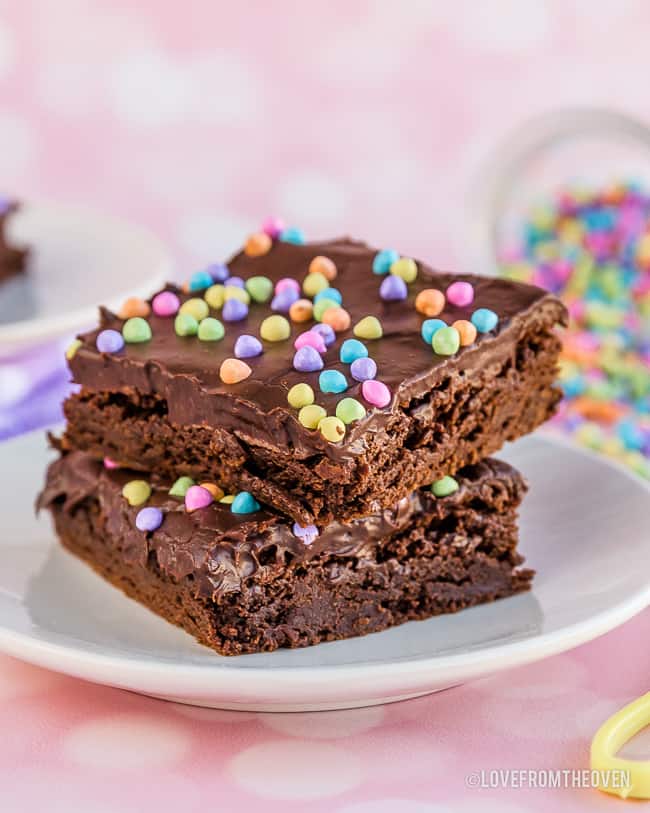 Once you make Cosmic Brownies you might never feel the need to make another kind of brownie ever again. Or, if you’re like me, you might suddenly find yourself brownie obsessed.

After these out of this world brownies, give some of my other favorites a try! For a true classic, go with my Homemade Brownies. My Easy Brownies Made With Cocoa Powder are incredibly delicious and so simple to make. Like a little crunch with your brownies? M&M Brownies fit the bill!

An easy brownie recipe that comes together in one bowl–plus one more for the ganache! If you have only one brownie recipe in your baking repertoire, this should be it. 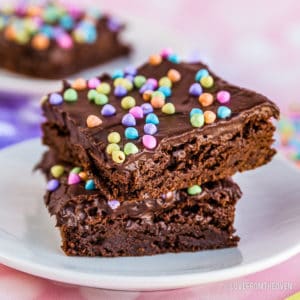 Ganache can be made with all semi-sweet or all milk chocolate if desired. Dark chocolate would also work for a less sweet option.  Store in a covered container.