This no-bake Easy Eggnog Pie is an eggnog lover’s dream dessert! It’s creamy texture and great eggnog flavor is a favorite in my home. If you need a quick and easy dessert this holiday season for your Thanksgiving dessert table or holiday Christmas party, I highly suggest this pie! 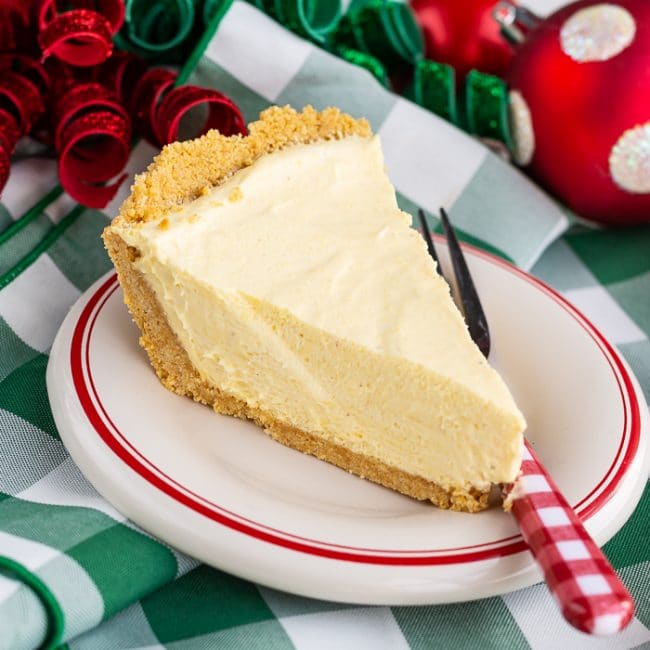 My husband loves eggnog. Or “nog” as he usually refers to it as. I am pretty sure it’s why I can get him to do the grocery shopping easily in late fall, because he’s stalking the dairy department for eggnog.

Eggnog is take it or leave it for me, it’s more the texture than the flavor that just isn’t my thing. The flavor I like, the bordering on shake like consistency texture, not so much.

While I was making a chocolate pie this weekend, it dawned on me that replacing the milk with eggnog in a vanilla pie would result in a super easy eggnog pie. 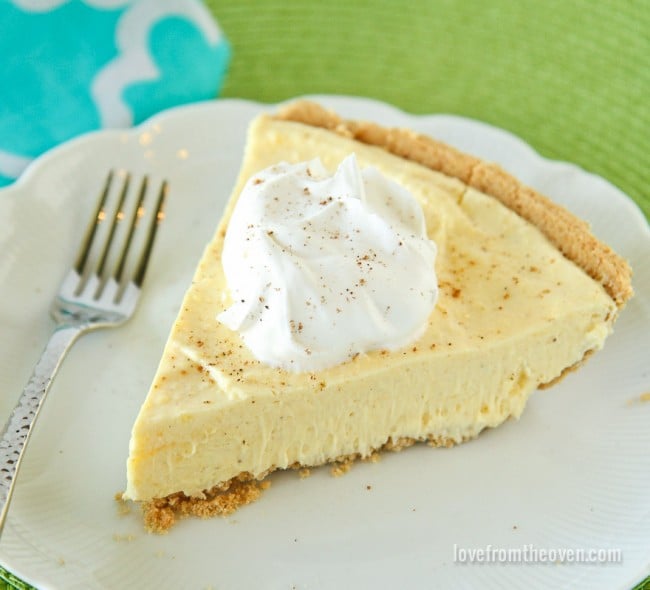 I’m by no means the first person to think of this, which is kind of how food blogging goes. You think of something and think, oh wow, great idea!

And then if you go search Google or Pinterest, you are sure to instantly find out that 398,083 people have had the same great idea. And the idea was probably in a kindergarten class cookbook in like 1978. And one of those magazine like little holiday cookbooks at the grocery checkout, most likely in 1986. 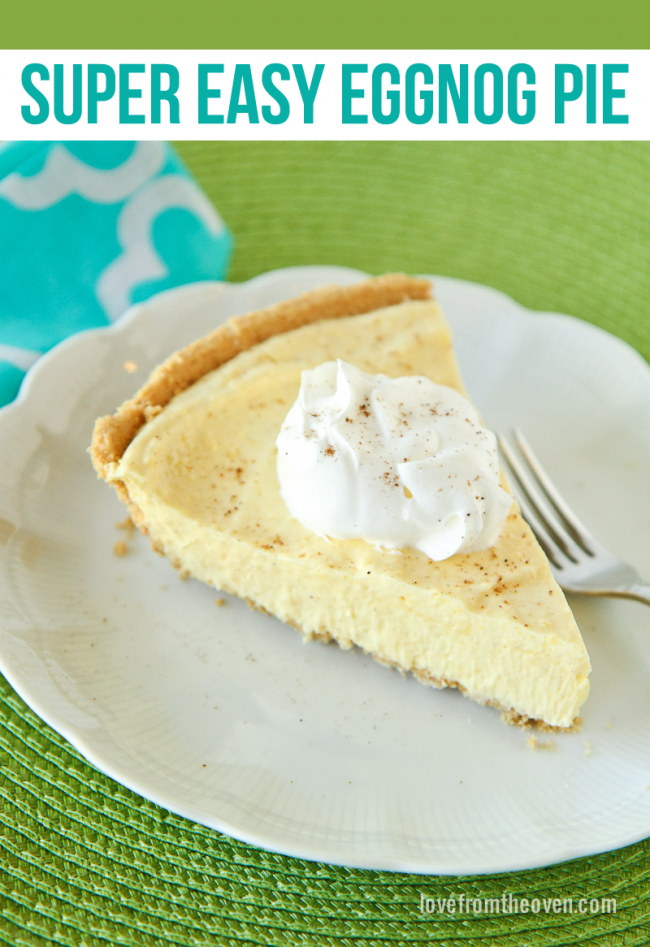 I had like six months where I would Google every single recipe idea I had, thinking every last one had to be completely original.

Yeah, that whole re-inventing the wheel thing, um, not so easy. It was super stressful and no fun whatsoever. Everyone has pretty much made everything. And that’s okay. I eventually figured that sometimes you just have to make and share the recipes that you love (or, that your husband loves) and leave it at that. Eggnog pie anyone? 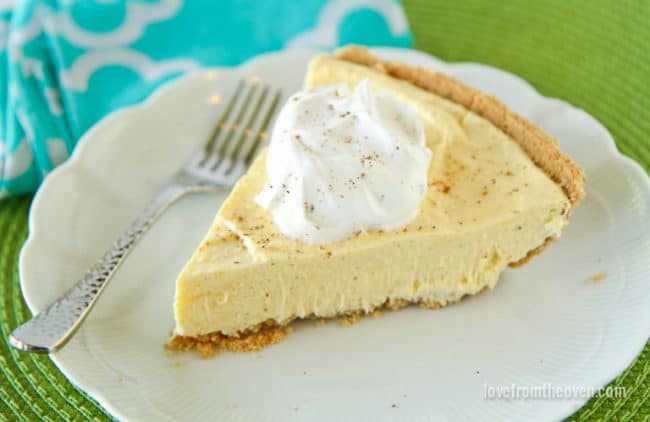 A warning, this is rich. Well, I mean, it’s made with eggnog, which is basically like drinking cream, so yeah, rich. You could totally cut back on some of the eggnog and replace it with milk.

Oh, also – one thing to pay attention to – the pre-made graham cracker pie crust my eggnog store searching husband picked up, was a bigger pie crust – “two extra slices” or something like that.

While that’s great and all, pie crusts are kind of a standard to some extent so a jumbo one can mess with your recipes. I was a little short on filling for this, and sort of pushed more of it towards the outer edge. Just something to pay attention to if you are buying a ready made crust. 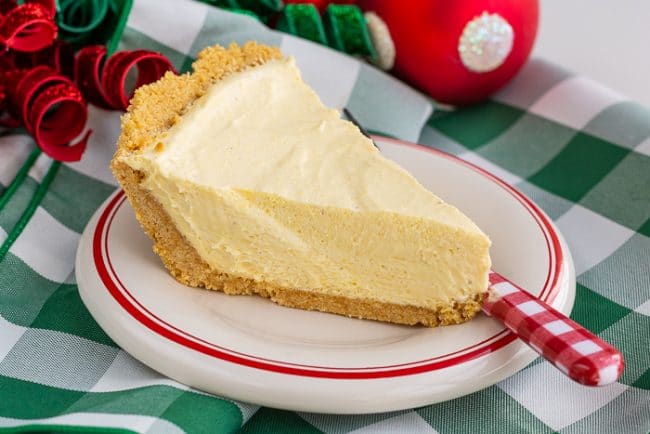 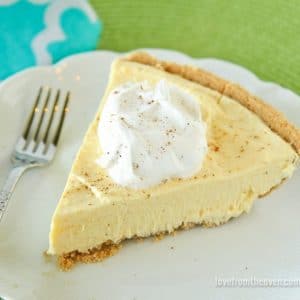 See, as I said, super EASY! If you have eggnog lovers in your family, this is totally for them. And here are a few more recipes that are packed full of eggnog deliciousness! 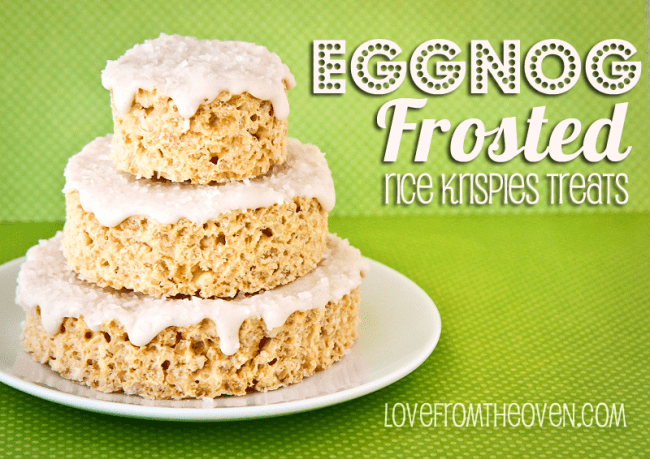 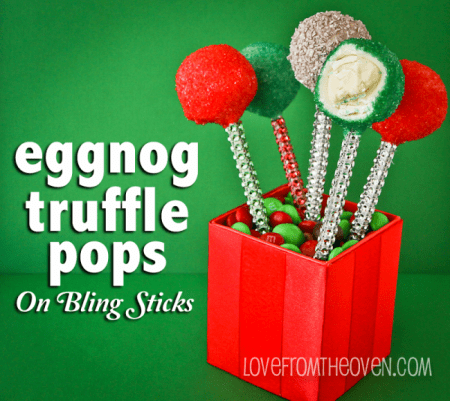