It’s September, which means it’s time for Apple Pie Cheesecake Bars! Apple desserts are one of my fall baking favorites, and this caramel apple pie cheesecake does not disappoint.

Cinnamon and pumpkin and apple, oh my! If you love apple pie and you love cheesecake, then you’ll really enjoy this recipe for caramel apple pie cheesecake bars.

I also snuck some caramel sauce in there. You know, for good measure. These caramel apple pie cheesecake bars are like having a few different desserts at once.

You have the crust which is almost like a pie crust. Then you have your cheesecake layer, which is, well, really good cheesecake. Next up your cinnamon apples. Deliciously pie like. And then the crumb topping. Oh the CRUMB TOPPING PEOPLE.

You basically need to make these and then immediately feed them to people, unless you have some fancy pants willpower of steel. It’s a slippery slope between just having a bite and just having a pan.

Not that I know or anything like that, I’m just thinking that’s how it could go down.

And another great thing about these apple pie cheesecake bars? I feel pretty justified telling my husband that I made him both apple pie AND cheesecake, thus it’s totally fair to expect him to do the dishes.

Have I convinced you yet to make these? SO DARN GOOD.

Love apples? I’m with you on that! Here are some other delicious apple recipes to try!

Cheesecake your favorite? Here are some recipes you’ll love! 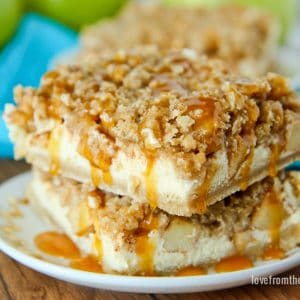 Optional – Caramel sauce for drizzling over the top when serving